CHURCH COUNCIL PRESENTS A CHECK TO THE GIVING TREE 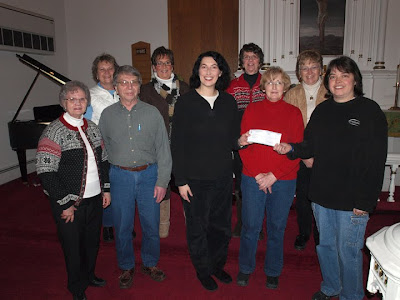 On January 27th, members of the church council and pastor of Our Savior’s Lutheran Church in Lansing presented a check for $1,000 to Angie Coltsch for “The Giving Tree” ministry. This local outreach is administered by the Lansing United Methodist Church under Coltsch’s leadership.

They money was raised primarily through a jazz concert called "Jazzed about Christmas,"on December 20th. Tom Bourcier, our musician, performed the concert on the new baby grand piano for a large crowd. It was professionally recorded live by Brett Huus of Soundstrations studio in LaCrosse, Wisconsin.

Posted by Our Savior's Lutheran Church at 10:00 PM No comments:

After the Haiti earthquake, word came initially that the Wartburg Theological Seminary students ministering there during the January term were safe.

Then, we learned that that report was wrong.

Pastors April and Judd Larson of Duluth, Minn., shared with others that their 25-year-old son Ben was dead.

When the earthquake hit, Ben Larson's wife, Renee Splichal Larson, and his cousin, Jonathan Larson, were in the same building as Ben. Renee and Jonathan "made it out, eventually found each other, then returned to St. Joseph Guest House in the attempt to rescue Ben, to no avail," Duane Larson wrote in a Jan. 14 letter to the Wartburg community.

Jonathan and Renee are being evacuated to the Dominican Republic, and "we're hoping that they will soon travel back to the United States," Duane Larson told the ELCA News Service.

Ben, Renee and Jonathan are fourth-year Wartburg seminarians certified for ordination. They traveled together to Haiti to help with the new Haiti Lutheran Church. Ben was teaching at the Pastors and Lay Leaders Theological Conference in Haiti.

"We so grieve with (Ben's) parents, April and Judd; for Renee's loss of her husband; Jonathan's loss of a dear cousin, for our loss of a beautiful friend," wrote Duane Larson. "Ben's baptismal light burned so brightly in our community and for all who came to know him. We 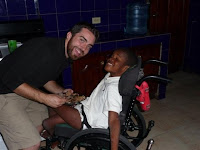 grieve the loss of so clear a proclamation, with eyes twinkling, of Christ's love, compassion and humor," he wrote.

Ben's mother, the Rev. April Ulring Larson, originally from Decorah, is pastor at First Lutheran Church, Duluth, Minn., and former bishop of the ELCA La Crosse Area Synod. His father, the Rev. Judd W. Larson, is a retired ELCA pastor. Both were formerly pastors at the Old East and West Paint Creek churches in Waterville. Ben is the youngest of the 4 Larson children.

Ben was a graduate of Luther College. During his college years, he worked at Sugar Creek Bible Camp. Pastor Laura first me him there and invited him to become the church musician for Our Savior’s Lutheran in 2005. He and his friend Marcos Grano de Oro from the Dominican Republic, then led music for worship for that entire school year. Their music and worship leadership was greatly appreciated by our congregation. Some in the congregation remembered meeting Ben as a child when his parents were pastors in Waterville.

As an infant Benjamin Judd Ulring Splichal Larson was wrapped in the arms of God in the waters of baptism, and from those waters, his life was an outpouring of love and joy, laughter and play, in response to God first loving Ben.

Ben’s love of God, walking in accompaniment, passionately loving others, listening and learning from those who are poor across the globe, drove his serving.

We give thanks to God for the incredible joy of knowing Ben. His laughter, playfulness, passionate heart for those who are hurting was manifest in his daily life. He delighted in the privilege of serving and knowing God, laying out his life in joy.

We are blessed by still being able to hear Ben‘s music. His father Judd says, “If you want to know Ben, go to his music.“ In his tender music remains some of the treasure that is Ben: what he believes, what he cares about, his deepest soul.

Most of the people who died in this deadly earthquake in Haiti are the poorest of the poor in this hemisphere. Ben went to Haiti to teach theology and scripture in the new Lutheran Church of Haiti; but more deeply to learn from these people loved by God. In his young death his life joins the bodies of the poor. In the Haitian rubble Ben’s life joins these dear beloved people of God: all those parents crying for their children; young widows calling out for their husbands; new orphans searching for their parents.

God have mercy on us. 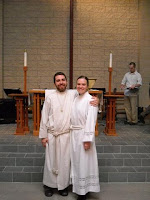 "We hold Renee, April, Judd, Jonathan and all of Ben's family and friends in prayer, trusting in God's mercy and the promise of the Resurrection," said the Rev. Mark S. Hanson, ELCA presiding bishop. "Our prayers are with the people of Haiti, and their families and friends throughout the world."

This is a deep loss for Ben’s family and circle of friends, for the Luther College community, the Wartburg Seminary community, and indeed, the entire ELCA. News reports of Larson’s death have circulated around the country.

We at Our Savior’s feel the deep pain of this loss as well and we offer our prayers and support to those who grieve for him. Condolences may be sent to the family at the following addresses.

Click here to donate to the relief effort in Haiti 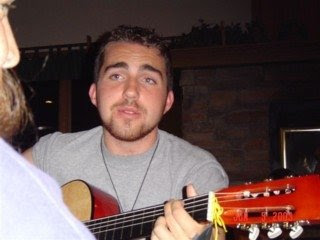 Posted by Our Savior's Lutheran Church at 10:30 AM No comments: 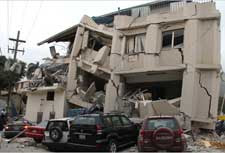 On January 12 at 4:53 p.m., a magnitude 7.0 earthquake rocked the island country of Haiti, primarily impacting its capital of Port-au-Prince and its nearly two million residents. It is believed that over three million citizens of Haiti are affected. The epicenter of the quake was centered approximately 10 miles west of Port-au-Prince. Offices, hotels, houses and shops have collapsed. Over 30 aftershocks ranging from 4.2 to 5.9 have already been recorded.

The city is without electricity and the telephone network has been overloaded with calls making it impossible to reach friends and family.

The presidential palace is in ruins and many churches have been destroyed. Hospitals that were not directly impacted by the quake are overflowing and the search for survivors is intense. Already one of the poorest countries in the world, this catastrophe will exacerbate the suffering felt by many already living with hunger and poverty.

The ELCA, through the Lutheran World Federation, is already responding to the critical needs of survivors in Haiti. Thankfully, the LWF offices and staff on the island were spared in the earthquake, making it possible for work to begin immediately. Staff there will focus their immediate efforts on issues of water safety and sanitation, assisting with medical triage, and providing emergency sheltering for the many who are now homeless. The ELCA has long-standing relationships in Haiti through several organizations and the Lutheran Church in Haiti.

In anticipation of your generous gifts, ELCA Disaster Response has authorized $250,000 for immediate relief assistance in Haiti, with the possibility for an additional $500,000 as the full scope of this disaster continues to become clear. Your gifts are needed now to make this type of rapid response possible.

While volunteers, especially skilled workers, will likely be needed in the coming months, the situation on the ground is still far too chaotic – no water, no power, few roads, and very limited communication – to support volunteers traveling to the area in the immediate days.

Read the message from Bishop Hanson.

What you can do:

Please hold the people of Haiti in your prayers. You can also contribute financially on line. Just click this link.

Posted by Our Savior's Lutheran Church at 8:22 PM No comments: