To promote their faith formation, Our Savior's Lutheran Church has presented six children with Bibles. These gifts were made possible by a donation made in loving memory of Marcella Guider and were presented to the kids during worship in February. Younger children were given Spark Story Bibles and older children were given Spark Bibles (an NRSV translation for kids complete with interactive stickers). These Bibles are published by the Lutheran publishing house, Augsburg Fortress and are designed specifically to activate faith in children. Our pastor, Laura Gentry, was a staff writer for the Spark Bible publication.

Below are pictures of each happy child with their Bible.


Posted by Our Savior's Lutheran Church at 11:14 AM No comments:

A new eternal flame was donated to Our Savior's Lutheran by E.M. Mueller in loving memory of his late wife. The eternal flame symbolizes God's constant presence and burns continually. The new flame is an oil candle rather than the disposable inserts we had been using. We are grateful to Mr. Mueller for his gift, which was dedicated in worship in February.

Posted by Our Savior's Lutheran Church at 12:12 PM No comments: 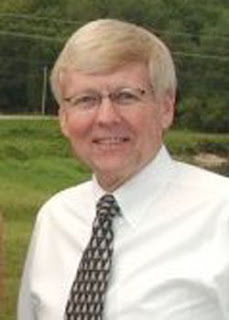 Our Savior's Lutheran member, Daryl Bolson, is the subject of this article, which was published in The Standard on February 22. His benefit will be held on March 24th and we encourage all to donate items and attend.

Most people smile when they hear Daryl Bolson’s name. Bolson knows just about everyone in Lansing - he’s owned and operated Lansing Feed Service for 39 years. According to Brett Bolson, Daryl’s son, the name is synonymous with what friendship is all about - acceptance, positive regard, honesty. Brett says when customers come into the feed store, Daryl doesn’t sell them anything until he knows who they are, where they live, family background, kids’ names, etc. His customers are his friends, and vice-versa. But last year the Lansing community and Daryl’s family were stunned and saddened to learn of his diagnosis of stage four prostate cancer.


Originally from Decorah, 63 year old Daryl Bolson and his wife Chris moved to Lansing in 1972 when Daryl became the manager of the feed store, which he then purchased in 1993. His life has always centered around the store and his family. A Christian man, Daryl and his family attend the Lutheran Church. When asked about Daryl’s hobbies, Brett laughed. “His hobby was working. Any other time he had was spent attending my and Anna’s school events. That and church.” Daryl never held anything against anyone - he was always unfailingly nice. In fact, Brett says his father was too nice to ask for payment when his customer friends needed supplies but were short on cash and couldn’t pay. So finances were something of a problem. Brett has tried to convince his father to get a little tougher to collect bills, but it just isn’t in his nature. Brett and his sister, Anna Darling, both say Daryl was a wonderful father. He was easy to talk to, always positive and easy-going - always there to encourage and support them.

Healthy all his life, Daryl began having symptoms of the cancer: fatigue, back pain, weight loss and urinary problems. After surgery, the doctors said the cancer had progressed into the bones so that radiation treatments were not an option. Family friends Dan Halvorson and John Rea decided to help. A benefit is planned March 24, which includes a Bake Sale and Kerndt Brothers Community Center from 2-5 p.m.  There will also be music, food and beverages at TJ Hunter’s banquet hall, followed by an auction and raffle from 5 to 11 p.m.

Daryl isn’t one to complain despite chronic pain, still looks good and continues to work every day. He spends time with his children and grandchildren when he isn’t working.  Daryl, Chris, Brett and Anna don’t talk about the illness among themselves. It’s too hard. But all the Bolsons appreciate their good friends, the prayers and well wishes. And what about the store? Brett says his father will continue to work there until he no longer can.
Posted by Our Savior's Lutheran Church at 12:09 PM No comments: 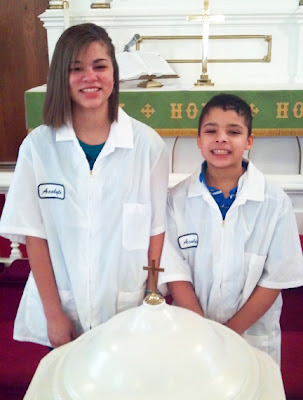 The acolytes at Our Savior’s Lutheran have just gotten an upgraded look. Instead of the old choir robes, they are now wearing crisp, white, zipped shirts with a cool, retro patch that says plainly: Acolyte. In the picture above, Jazmine and Emilo Rathbun model the new acolyte apparel. Incidently, this picture was taken on February 5th, which is their baptismal birthday.

Posted by Our Savior's Lutheran Church at 2:28 PM No comments: