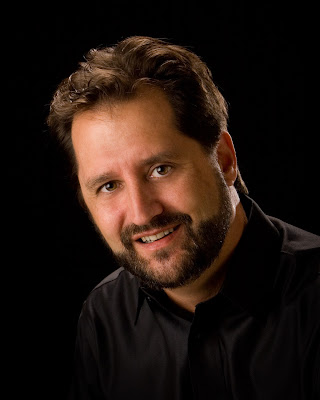 Our Savior’s Lutheran Church will be presenting a a solo piano benefit concert featuring their worship musician, Tom Bourcier, on Thursday, July 16 at 7:00 p.m.
A jazz pianist, composer, and music professor at Luther College, Tom will be performing a broad selection of classic songs from the great American songbook, as well as original jazz and blues pieces.

As a professional musician, Tom has performed throughout the United States, Europe, South America and the Caribbean, performing with and backing up musicians and acts such as the Dirty Dozen Band, Dizzy Gillespie, Jim Schwall of the Siegal-Schwall Band, Buddy Rich, Donald O’Connor, comedian David Brenner, Debbie Reynolds, and Jack Jones. From 1987-96 he led the Tom Bourcier Trio, and subsequently performed accordion with Bourcier, Julin and Wolff. The group released a CD, Live at St. Andrews, in 2000. Tom also performs accordion with singer/songwriter Robin Lee Berry on Going Driftless, a 2002 Red House Records retrospective of Greg Brown songs performed by female artists. His first solo piano CD, Steps, was released in 2002. Portals, a tango suite composed for movement theatre, will be released in 2009 on the independent label 2 Moons Records.

Tom received the Master of Music degree in composition from Western Michigan University. He served as Music Director/Assistant Professor in the Department of Dance at the University of Illinois from 1991-96, and premiered 17 original compositions in Illinois Dance Theatre and Illinois Repertory Theatre productions. His jazz chart In Walked Bo was recently recorded by the Composer’s Big Band in New York City. In 2004, I Saw Elvis for alto saxophone and electric guitar, received its European premiere at the Royal Conservatory of Music in London. It was published in 2008 by Media Press Inc. (Chicago).

At Luther College Tom teaches improvisation, supervises jazz combos, and directs the Jazz Band and Luther College Jazz Quintet. Tom also works on a free-lance basis, and his 2007–08 schedule had him performing throughout the Midwest in Iowa, Illinois, Wisconsin, Minnesota and Michigan, as well as Puebla, Mexico, Sao Paulo and Rio de Janeiro, Brazil, Chicago, Milwaukee and San Francisco. He resides in rural Decorah with his four sons. 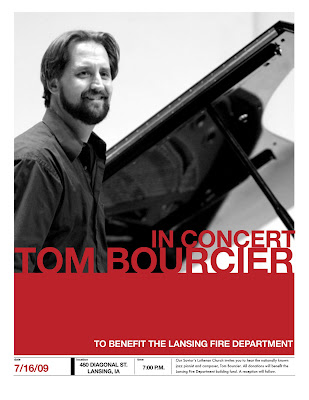 The public is invited to attend the concert. The church is located at 480 Diagonal Street in Lansing. A free will offering will be taken to benefit the Lansing Fire Department Building Fund. A reception will follow. For more information, visit www.laughinglutherans.com or call 563-538-4664.
Hear a sampling of Tom's playing at these YouTube videos:
Posted by Our Savior's Lutheran Church at 4:53 PM No comments: 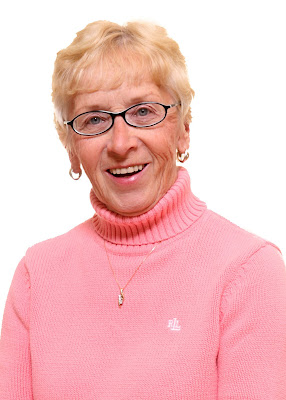 Nancy Lou Osen Sherwood Amble, 67, of Lansing, IA passed away peacefully at her home, surrounded by her family, June 20, 2009, after a courageous battle with cancer.

Nancy loved her family and friends dearly, and enjoyed every minute spent with them. She was so proud of the many accomplishments of her children and grandchildren. Nancy loved spending time with her grandchildren, who she thought were outstanding.

Nancy loved spending time on the Mississippi River. She also enjoyed camping, fishing, gardening, traveling, church, and she loved her annual trips to Florida with her special friend Mike.

Nancy was an active and dedicated member of Our Saviors Lutheran Church in Lansing.

Nancy was preceded in death by her parents; her husband Dave Amble, August 5, 2003; brother-in-law Jack Greene; and sister-in-law Mary Osen.

A celebration of Nancy’s life will be held Saturday, June 27th, 2009 at 1pm at Our Saviors Lutheran Church, Lansing, IA. Pastor Laura Gentry will officiate.

Memorials, in Nancy’s name, may be made to support ongoing research for cystic fibrosis. This was an issue that was close to Nancy’s heart. Donations may be sent to Darci Greene, 15480 Furuby Road, Center City, MN, 55012.
Click here to read the sermon from Nancy's funeral.
Posted by Our Savior's Lutheran Church at 1:07 PM No comments:

A big celebration was held at worship on Sunday, June 21. Not only was it first communion for a group of 8 young people, but we presented 18 Bibles to the Sunday school children and gave pops to the pops on Father's Day. A reception followed worship. First Communion was received by the following students pictured above: (back row) Melony Orr, Louis Nguyen, Ellicha Gage, Jazmine Rathbun, (front row) Lucas Kerndt, Kyle Hitchins, Emilio Rathbun, Riley Gage. These young people have been preparing for this day since May and each created a special project to reflect their excitement about partaking of the sacrament of Holy Communion. The group also led the congregation in singing "The Welcome Table" and received certificates commemorating the occasion. 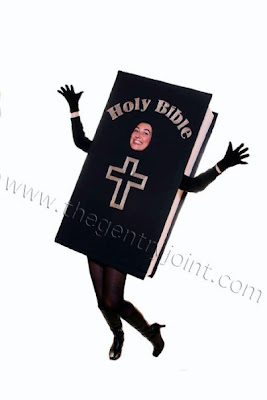 The Bible showed up to help the congregational president, Dr. Jan Schweitzer, present Spark Bibles (NRSV) to the older children and Spark Story Bibles to the younger children of the Sunday school. These Bibles are brand new resources released by the Lutheran publishing house, Augsburg Fortress. Pastor Laura was a writer on Spark Bible. They were given in loving memory of Marcella Geuder. These Bibles will be the basis of our Sunday school curriculum next fall.
The children who received Spark Story Bibles are:
• Nicholas Rethwisch
• Ethan Schweitzer
• Jack Schweitzer
• Kai Timmerman
• Zoey Timmerman
The young people who received Spark Bibles are:
• Beau Bourcier 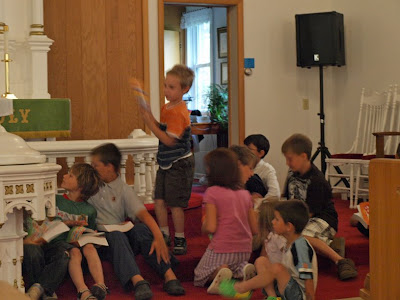 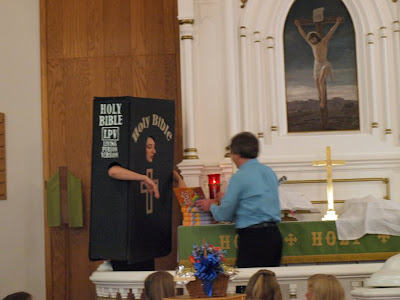 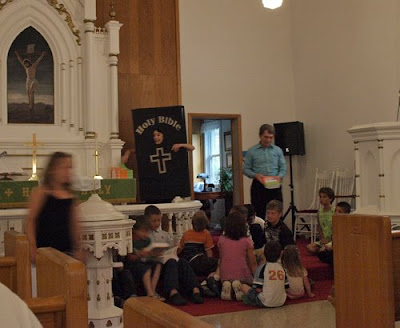 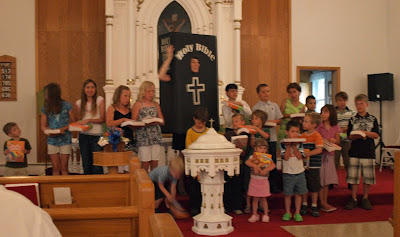 The "pops" were given Tootsie pops from a candy bouquet. We wanted all the dads to feel special on Father's Day. 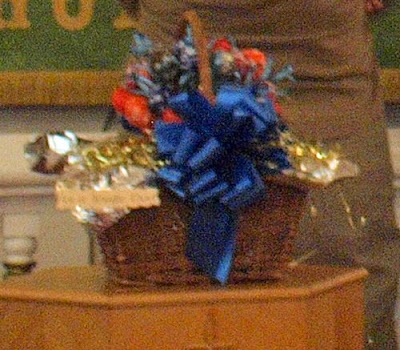 A reception followed worship with a beautiful First Communion cake made by Carol Schaefer. The youth also made s'mores bars for the occasion. 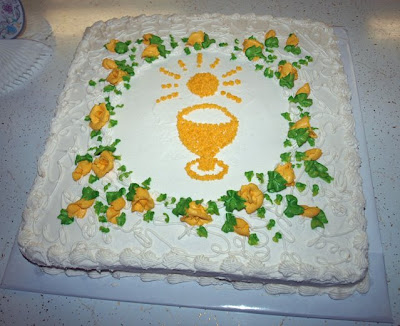 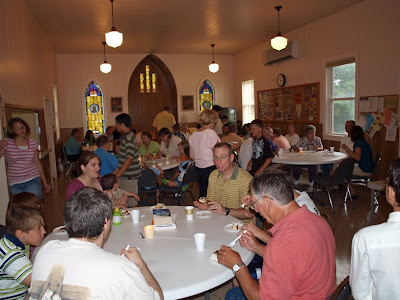 Posted by Our Savior's Lutheran Church at 1:53 PM No comments: 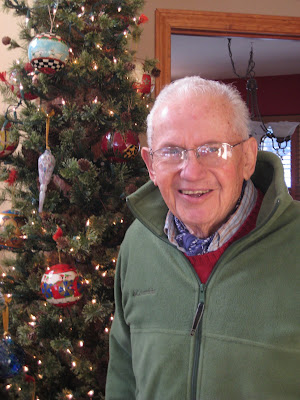 Edward and Helen Langer were long-time members of Our Savior's Lutheran until they moved to Decorah in 2001.


Edward Ernest Langer, age 91, died peacefully on June 16, 2009, in Albuquerque, New Mexico. Ed was born November 6, 1917, in Chicago, Illinois, to Ernest and Marie Czerny Langer, immigrants from Austria and Czechoslovakia. He was graduated from Morton High School and Junior College in Cicero, Illinois.

Ed earned a Master’s Degree in Business from the University of Chicago, specializing in foreign trade and transportation. Ed helped finance his education by playing viola in a dance orchestra that performed around the Chicago area.

After employment with the Seagram Calvert Distilling Company in Louisville, and Baltimore, Ed came to work for Sears, Roebuck and Company in Chicago, where he remained for the rest of his career. His first assignment was in traffic management.

In 1942, Ed was commissioned an Ensign in the US Navy. He served on the aircraft carrier USS Card. He was assigned to the staff of the Amphibious Forces and participated in the planning and execution of Army and Marine landings in Sicily, Saipan, Palau, Linguayan Gulf, Leyte, and Iwo Jima. He was awarded the Bronze Star for action in the Philippines. He continued to study naval skills after completing active duty, and achieved the rank of Lieutenant Commander in the reserves.

Ed married Helen Lohrmann, of Berwyn, Illinois, on June 21, 1945, while on a leave in Long Beach, California. To secure the permission of Helen’s father, a Lutheran pastor, Ed was confirmed in the Lutheran faith on an earlier leave from the Navy.

After military service, Ed returned to Sears. As a buyer of steel products, he travelled throughout Europe and the Far East. During this time, the Langers raised three children in Brookfield, Illinois, where Ed served the community on both the School Board and the Library Board.

Following retirement from Sears in 1973, Ed and Helen moved to a historic stone house in Lansing, Iowa, overlooking the Mississippi River. Ed took up fishing and beekeeping. He played viola with the University of Wisconsin at LaCrosse Symphony Orchestra. He acquired a Hardanger Norwegian folk fiddle and played at festivals in the area. He served as chaplain in his VFW chapter. The couple continued to travel, especially enjoying freighter trips to exotic ports.

In 2001, Ed and Helen moved to independent living in Decorah, Iowa. After Helen’s death in 2006, Ed relocated to Albuquerque, New Mexico, living with daughter Jane McGuire and her family.

Ed is survived by son Richard Langer (Christelle) of Minneapolis, daughters Jane McGuire (David) of Albuquerque, and Mary Butler (Van) of Durango, Colorado, and six grandchildren. He was preceded in death by his wife of 61 years, and his brother Robert.

Ed donated his body to the University of New Mexico School of Medicine. A memorial celebration will be held on Saturday, July 11, 2009, at St Michael & All Angels Episcopal Church, Albuquerque, where Ed was a member. Memorial gifts may be made to the parish’s New Building Fund, in lieu of flowers.
Expressions of sympathy may be sent to:
Mary Butler
62 Cypress Court
Durango, CO 81301
Posted by Our Savior's Lutheran Church at 8:15 PM No comments: 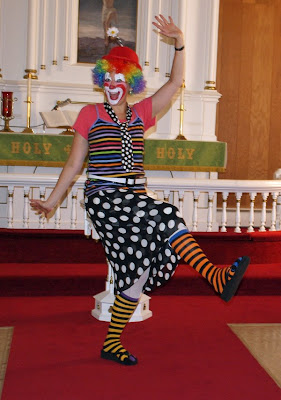 Pastor Laura just got back from Clown Camp in LaCrosse, Wisconsin. There, she learned a multitude of things about the art of clowning and how to apply it in ministry.

She can be seen in this TV news story. Watch for her in a bright pink wig and black and white polka dots.

Pastor Laura preached a clown sermon when she returned on Sunday, June 14. Read the text and see pictures at her sermon blog.
In the future, she hopes to involve congregational members (especially youth) in clown ministry performances in worship and the community.
Posted by Our Savior's Lutheran Church at 3:39 PM No comments: