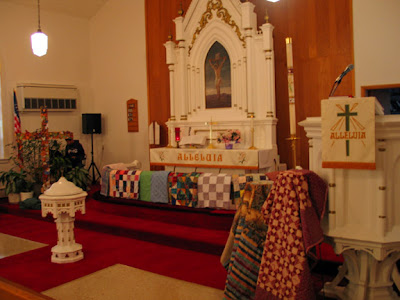 On Sunday, April 26, we dedicated quilts made by our Women of the ELCA group. These beautiful, hand-made quilts were made by Margaret Cannon, Carolyn Vogel, Donna Reed, Gayle Bahlmann, Grace Ziegelmaier and Georgia Thompson.
The quilts have been sent to Minneapolis to the Women of the ELCA headquarters. From there, they will ship off to locations around to world through Lutheran World Relief to people in need. We are excited for these quilts to reach them.

Posted by Our Savior's Lutheran Church at 12:29 PM No comments:

"Ha ha ha! Christ is risen! Christ is risen, indeed! Ha ha ha!" That's what we said throughout our worship service yesterday as we celebrated Holy Hilarity Sunday at Our Savior's Lutheran Church in Lansing, Iowa.
Link to the article in the Standard, Waukon, Iowa. 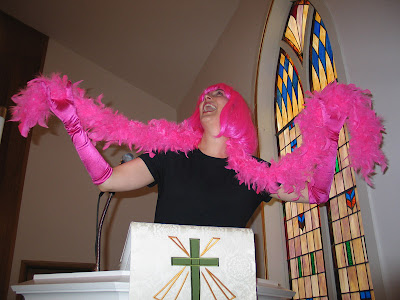 Yes, that's Pastor Laura—preaching in her pink wig, boa and opera gloves. Have you ever seen such levity in church? Well, perhaps she's the only preacher to wear such a bright shade of pink but she's not the only pastor to celebrate the Easter season with humor and laughter. Christians all over the world, you see, are resurrecting an ancient tradition of celebrating the Easter festival with humor and merriment.
Church historians tell us that there is considerable evidence that during the early centuries of Christianity, Easter celebrations went on for days and even weeks. With it, the tradition of “Holy Hilarity Sunday” developed. This custom of celebrating the resurrection with lightheartedness is especially rooted in the religious life of Eastern Europe. 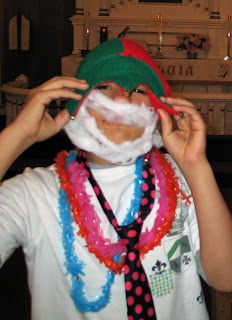 The theological reason for it is that the resurrection can been viewed as God’s great joke on the devil. You see, the devil thought he’d won: Christ had been crucified and was now dead in the tomb. Then three days later—ha ha ha—Christ is risen! It’s the unexpected ending that makes it funny. Some call the resurrection the "banana peel" of the Christian faith, the "cosmic pratfall." For indeed, because the resurrection, God has the last laugh.

And we can laugh, too, because the joy of the Lord is our strength. Laughter is a holy thing that helps us embody the exciting reality that Jesus is risen from the dead. Now death has no more sting. We can even laugh in the face of death, fully confident in the redemptive power of God. 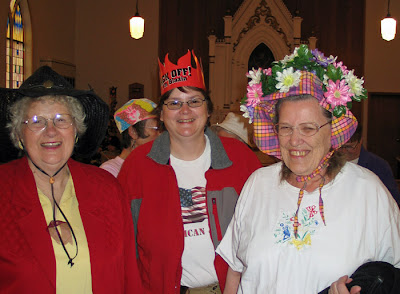 Two years ago, Pastor read about the tradition of Holy Hilarity Sunday in The Lutheran, the official magazine of the Evangelical Lutheran Church in America (the Christian denomination in which I am an ordained minister). She found it to be an exciting option for worship and since our church had just launched a laughter club, we decided to try celebrating Holy Hilarity Sunday ourselves. 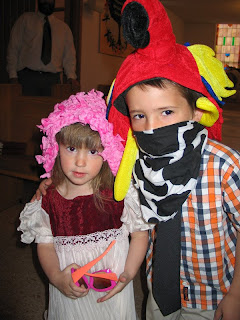 We have now held three such Holy Hilarity Sundays and it has been an absolute delight. These celebrations have kept worship attendance up on the Sunday after Easter—a traditionally low attendance day across the denominational lines. 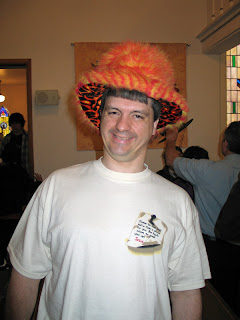 At this service, people are invited to wear silly hats and costumes. My laughter hat collection is quite large and so I bring them in to share. It is hilarious to see the funny things people wear to worship. Many get creative and make their own hats with flowers, bows, rabbits and other animals perched upon it.

This year, Bob Wood of Desoto, Wisconsin (below) wore a costume with two sets of arms. “This way, when I fold my hands in prayer is has twice the power,” he joked. 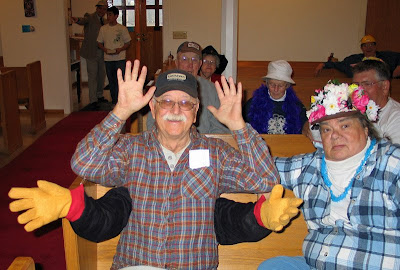 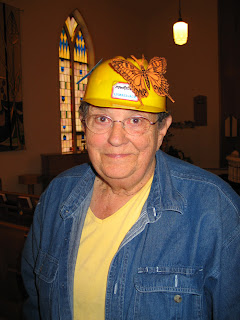 Carol Schaefer (left) wore a resurrection hardhat covered in butterflies and amazingly adorable, mismatched polka dotted shoes (below). How about that for "church shoes"? 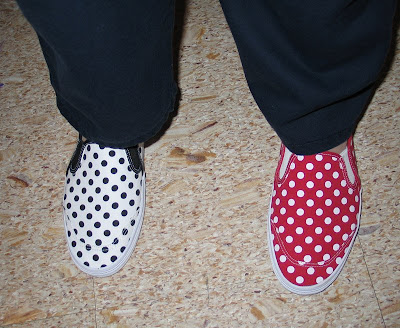 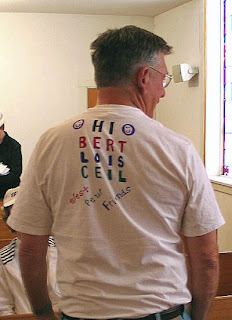 Gary Bahlmann (right) wore the Holy Hilarity T-shirt his wife, Gayle, made him last year. On the back of the shirt, it has a greeting to the people who normally sit behind them and declares them all “West Pew Friends.” This playfully pokes fun at our tendency to always sit in the very same pew.
We introduced some playful songs this year as well. These included interactive Sunday school songs that are fun for the whole family. We also debuted two original laughing songs from Pastor's laughter album, Today is a Laughing Day. Not only that, we did the “Bunny Hop” to the song “Lord of the Dance.”

Throughout the service, the praise word “Halleluia!” is replaced by a burst of hearty laughter, which also expresses praise. We also do the passing of the peace by shaking hands, joyfully looking into one another’s faces and laughing. And, of course, Pastor collects some appropriate church and Easter jokes to tell during the sermon. 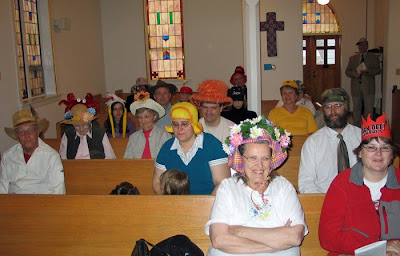 Here is an Easter joke:

Three sillies die in a freak banana peel accident and arrive at the pearly gates of heaven. St. Peter tells them that they can enter the gates if they can answer one simple question: "What is Easter?"

The first silly is eager to respond. He says: "Oh, that's easy, it's the holiday in November when everybody gets together, eats turkey, and is thankful..."

"No!" replies St. Peter, and proceeds to ask the second silly the same question, "What is Easter?"

The second silly replies, "Easter is the holiday in December when we put up a nice fir tree, exchange presents, and celebrate the birth of Jesus."

St. Peter shakes his head in disgust, “Can’t anyone get this simple question?” So he poses it to the third silly: "What is Easter?"

Now this silly is very confident. He says: "I know what Easter is. Easter is the Christian holiday that coincides with the Jewish celebration of Passover. Jesus and his disciples were eating at the last supper and but he was betrayed by one of his own disciples so the Romans came and arrested him. They flogged him and made him wear a crown of thorns. They crucified him between two criminals with a sign over his head that read 'the king of the Jews' and when he died, there was a great earthquake and the curtain in the temple was ripped in two. The centurion who saw it said, 'surely this was the son of God.' Then his followers buried his body in a cave tomb and they rolled a huge stone over the entrance to seal it.” 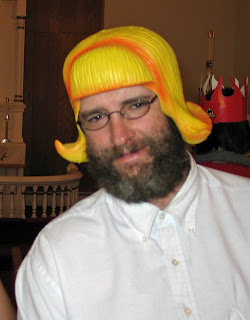 Saint Peter can hardly contain himself, he nods his head and approvingly says, “Yes, yes!”

But then the silly continues: “And every year the stone is rolled aside and Jesus pops out, and if he sees his shadow there will be six more weeks of winter."

May we all live as joyful resurrection people today and every day. Christ is risen, indeed! ha ha ha! 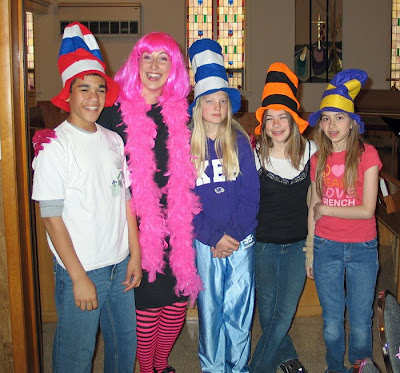 Visit Pastor's sermon blog to see more pics and read the collection of Holy Hilarity sermons:
2009—The Banana Peel of the Christian Faith
2008—He He He is Risen
2007—Holy Hilarity
Posted by Our Savior's Lutheran Church at 3:50 PM No comments: 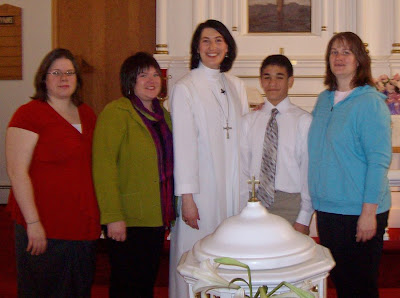 Our Savior's Lutheran Church had an exciting Easter Sunday with Holy Communion, Easter lilies, triumphant music and the Baptism of Louis V. Nguyen. This young man, who was born in 1995, has been in confirmation class since the fall. He has long anticipated his Baptism and was delighted that it could happen on Easter, which is the tradition of the early Christian church. Pictured here are his aunts and sponsors Jennifer Perez and Mary Beth Thesing, Pastor Laura Gentry, Louis and his mother, Lori. We are overjoyed to welcome Louis into the family of God!
Posted by Our Savior's Lutheran Church at 3:43 PM No comments: